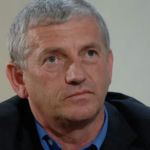 Why Is Arnold Stadler Influential?

According to Wikipedia, Arnold Stadler is a German writer, essayist and translator. Life He was born on 9 April 1954 in Meßkirch in the district of Sigmaringen in Baden-Württemberg in Germany. Stadler grew up on a farm in Rast, a small village adjoining Sauldorf, a neighboring village of his birthplace Meßkirch. Stadler studied catholic theology in Munich and Rome, German philology at Freiburg im Breisgau and Köln, ending with a doctoral degree . The first serious and prominent recommendation regarding his works came 1994 of Martin Walser . The partial autobiographically affected works play frequently in his region of origin , the landscape between the Danube and the Lake of Constance. The change of this rurally shaped area and its homelessness are recurring topics in his literary works.

Other Resources About Arnold Stadler

What Schools Are Affiliated With Arnold Stadler?

Arnold Stadler is affiliated with the following schools:

What Are Arnold Stadler's Academic Contributions?

Arnold Stadler has made the following academic contributions: