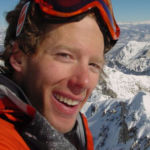 Why Is Aron Ralston Influential?

According to Wikipedia, Aron Lee Ralston is an American outdoorsman, mechanical engineer and motivational speaker known for surviving a canyoneering accident by cutting off part of his right arm. On April 26, 2003, during a solo descent of Bluejohn Canyon in southeastern Utah, he dislodged a boulder, pinning his right wrist to the side of the canyon wall. After five days, he had to break his forearm in order to amputate with a dull pocket knife to break free, make his way through the rest of the canyon, rappel down a drop, and hike to safety.

Other Resources About Aron Ralston

What Schools Are Affiliated With Aron Ralston?

Aron Ralston is affiliated with the following schools:

What Are Aron Ralston's Academic Contributions?

Aron Ralston has made the following academic contributions: