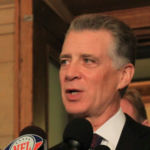 American lawyer and administrator/owner of the Pittsburgh Steelers

Why Is Art Rooney II Influential?

According to Wikipedia, Arthur Joseph Rooney II is the owner of the Pittsburgh Steelers of the National Football League . Early life Arthur Joseph Rooney II was born in Pittsburgh, Pennsylvania, the eldest of nine children of Patricia and longtime Steelers chairman Dan Rooney, and the grandson of Steelers founder “The Chief”, Art Rooney, Sr. He graduated from the University of Pittsburgh in 1978 with a B.A. in Political Science. He then attended Duquesne University’s School of Law, where he earned his J.D. degree in 1982.

Other Resources About Art Rooney II

What Schools Are Affiliated With Art Rooney II?

Art Rooney II is affiliated with the following schools: