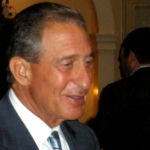 Why Is Arthur Blank Influential?

According to Wikipedia, Arthur M. Blank is an American businessman and a co-founder of the home improvement retailer The Home Depot. He also currently owns two professional sports teams based in Atlanta, Georgia - the Atlanta Falcons of the National Football League and Atlanta United of Major League Soccer , the latter of which having won the 2018 MLS Cup, thus giving him an MLS Cup Championship to his credit.

Other Resources About Arthur Blank

What Schools Are Affiliated With Arthur Blank?

Arthur Blank is affiliated with the following schools: