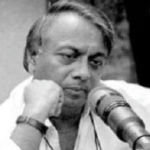 Why Is Ashok Kumar Influential?

According to Wikipedia, Ashok Kumar Aggarwal was an Indian cinematographer who worked mainly in the South Indian film industry. In a career that spanned nearly four decades, he worked in over 125 feature films in Tamil, Telugu, Malayalam, and Hindi languages. Aggarwal was a member of the Indian Society of Cinematographers .

Other Resources About Ashok Kumar

What Schools Are Affiliated With Ashok Kumar ?

Ashok Kumar is affiliated with the following schools: