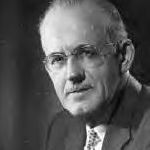 Why Is A. W. Tozer Influential?

According to Wikipedia, Aiden Wilson Tozer was an American Christian pastor, author, magazine editor, and spiritual mentor. For his accomplishments, he received honorary doctorates from Wheaton and Houghton colleges. Early life Tozer hailed from a tiny farming community in western La Jose, Pennsylvania. He was converted to Christianity as a teenager in Akron, Ohio: While on his way home from work at a tire company, he overheard a street preacher say, "If you don't know how to be saved ... just call on God, saying, 'Lord, be merciful to me a sinner.'" Upon returning home, he climbed into the attic and heeded the preacher's advice.

Other Resources About A. W. Tozer

What Schools Are Affiliated With A. W. Tozer?

A. W. Tozer is affiliated with the following schools: