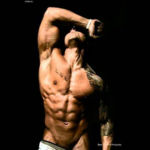 Why Is Aziz Shavershian Influential?

According to Wikipedia, Aziz Sergeyevich Shavershian , better known by his Internet handle Zyzz, was a Russian-born Australian bodybuilder, personal trainer and model. He established a cult following after posting multiple videos of himself on YouTube, starting in 2007.

Other Resources About Aziz Shavershian

What Schools Are Affiliated With Aziz Shavershian?

Aziz Shavershian is affiliated with the following schools: