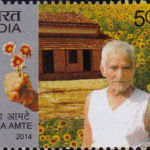 Why Is Baba Amte Influential?

According to Wikipedia, Murlidhar Devidas Amte, popularly known as Baba Amte, was an Indian social worker and social activist known particularly for his work for the rehabilitation and empowerment of people suffering from leprosy. He has received numerous awards and prizes including the Padma Vibhushan, the Dr. Ambedkar International Award, the Gandhi Peace Prize, the Ramon Magsaysay Award, the Templeton Prize and the Jamnalal Bajaj Award. He is also known as the modern Gandhi of India.

Other Resources About Baba Amte