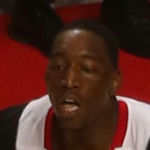 Why Is Bam Adebayo Influential?

According to Wikipedia, Edrice Femi "Bam" Adebayo is an American professional basketball player for the Miami Heat of the National Basketball Association . He played college basketball for the Kentucky Wildcats before being selected by the Heat with the 14th overall pick in the 2017 NBA draft. He was named an NBA All-Star and voted to the NBA All-Defensive Second Team during the 2019–20 season.

Other Resources About Bam Adebayo

What Schools Are Affiliated With Bam Adebayo?

Bam Adebayo is affiliated with the following schools: