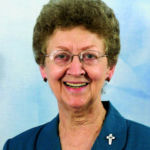 Educator and theologian from the USA

Why Is Barbara Doherty Influential?

According to Wikipedia, Barbara Doherty was an educator and theologian. A Roman Catholic religious sister, she was a member of the Sisters of Providence of Saint Mary-of-the-Woods. She was president of Saint Mary-of-the-Woods College in Indiana from 1984 to 1998. Other posts have been as director of the Institute of Religious Formation at Catholic Theological Union in Chicago, president of the Indiana Conference of Higher Education, and on national boards of the Leadership Conference of Women Religious and the Women's College Coalition.

Other Resources About Barbara Doherty

What Schools Are Affiliated With Barbara Doherty?

Barbara Doherty is affiliated with the following schools: