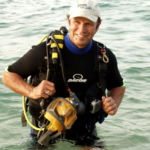 Why Is Barry Clifford Influential?

According to Wikipedia, Barry Clifford is an American underwater archaeological explorer, best known for discovering the remains of Samuel Bellamy's wrecked pirate ship Whydah [pronounced wih-duh], the only fully verified and authenticated pirate shipwreck of the Golden Age of Piracy ever discovered in the world – as such, artifacts from the wreck provide historians with unique insights into the material, political and social culture of early 18th-century piracy.

Other Resources About Barry Clifford

What Schools Are Affiliated With Barry Clifford?

Barry Clifford is affiliated with the following schools: