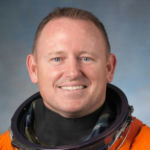 Why Is Barry E. Wilmore Influential?

According to Wikipedia, Barry Eugene "Butch" Wilmore is a NASA astronaut and United States Navy test pilot. He has had two spaceflights, the first of which was an 11-day Space Shuttle mission in November 2009, to the International Space Station. Wilmore was designated as pilot with five other crew members on Space Shuttle Atlantis for the mission STS-129. He most recently served as part of Expedition 41 to the International Space Station.

Other Resources About Barry E. Wilmore

What Schools Are Affiliated With Barry E. Wilmore?

Barry E. Wilmore is affiliated with the following schools: