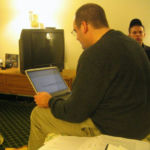 Why Is Barry Pyle Influential?

According to Wikipedia, Barry Pyle is an associate professor at Eastern Michigan University in the United States who has written on the American judicial system. Along with Elaine Martin he has written "Gender and Racial Diversification of State Supreme Courts". This article was noted by Political Science Quarterly as "one of the best and most comprehensive works on ... the jurisprudence and gender stratification pervasive in the United States legal system."

Other Resources About Barry Pyle

What Schools Are Affiliated With Barry Pyle?

Barry Pyle is affiliated with the following schools: