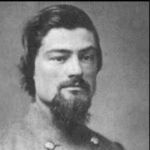 Why Is Basil W. Duke Influential?

According to Wikipedia, Basil Wilson Duke was a Confederate general officer during the American Civil War. His most noted service in the war was as second-in-command for his brother-in-law John Hunt Morgan; Duke later wrote a popular account of Morgan's most famous raid: 1863's Morgan's Raid. He took over Morgan's command after Morgan was shot by Union soldiers in 1864. At the end of the war, Duke was among Confederate President Jefferson Davis's bodyguards after his flight from Richmond, Virginia, through the Carolinas.

Other Resources About Basil W. Duke

What Schools Are Affiliated With Basil W. Duke?

Basil W. Duke is affiliated with the following schools: