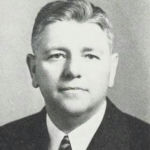 Why Is Batsell Baxter Influential?

According to Wikipedia, Batsell Baxter was one of the most important leaders and educators in the Churches of Christ in the first half of the 20th century. Biography He received his early education from David Lipscomb and James A. Harding at the Nashville Bible School . He also obtained degrees from Abilene Christian College , University of Southern California , and Vanderbilt University .

Other Resources About Batsell Baxter

What Schools Are Affiliated With Batsell Baxter?

Batsell Baxter is affiliated with the following schools: