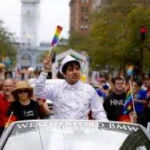 Why Is Belo Cipriani Influential?

According to Wikipedia, Belo Miguel Cipriani is an American writer, publisher, and entrepreneur in the Twin Cities of Minnesota. He is the founder of Oleb Media, a digital inclusion firm, and the disability publishing house Oleb Books. He is also an activist for LGBT, disabled and cultural minority communities. Cipriani has been a columnist for publications including the Bay Area Reporter, San Francisco Chronicle, Huffington Post among others. He is the author of Blind: A Memoir , which details the first two years of his recovery after he was attacked and beaten in the Castro District of San Francisco, California in 2007. Additionally, Cipriani is the official spokesperson for Guide Dogs For the Blind and was named "Best Disability Advocate" by SF Weekly in 2015.

Other Resources About Belo Cipriani

What Schools Are Affiliated With Belo Cipriani?

Belo Cipriani is affiliated with the following schools: