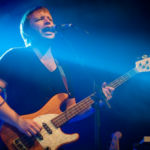 Why Is Ben McKee Influential?

According to Wikipedia, Benjamin Arthur McKee is an American musician, songwriter, and record producer. He is the bassist for the pop rock band Imagine Dragons. Early life McKee was raised in Forestville, California, and graduated from El Molino High School. He grew up playing acoustic guitar and violin, before picking up acoustic bass in fifth grade. In high school, he continued learning bass guitar as a member of a jazz trio, which influenced his decision to attend Berklee College of Music. While at Berklee, McKee played in a guitar performance ensemble with future Imagine Dragons bandmates Wayne Sermon and Daniel Platzman.

Other Resources About Ben McKee

What Schools Are Affiliated With Ben McKee?

Ben McKee is affiliated with the following schools: