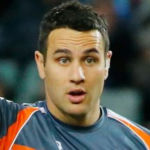 Why Is Ben O'Keeffe Influential?

According to Wikipedia, Ben O'Keeffe is a rugby union referee from New Zealand. He currently referees at domestic, Super Rugby and test match level.O'Keeffe became a professional referee for the New Zealand Rugby Union in 2013 having started officiating in 2008 at the age of 19. On 31 August 2013, he made his domestic debut during the 2013 ITM Cup match between Auckland and Bay of Plenty. On 24 October 2015, he officiated the 2015 ITM Cup Final between Canterbury and Auckland.

Other Resources About Ben O'Keeffe

What Schools Are Affiliated With Ben O'Keeffe?

Ben O'Keeffe is affiliated with the following schools: