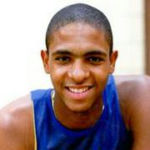 Why Is Ben Wilson Influential?

According to Wikipedia, Benjamin Wilson Jr. was an American high school basketball player from Chicago, Illinois. Wilson, a Neal F. Simeon Vocational High School basketball player, was regarded as the top high school player in the U.S. by scouts and coaches attending the 1984 Athletes For Better Education basketball camp. Wilson is noted as the first Chicago athlete to receive this honor. On November 21, 1984, Wilson died due to injuries he sustained in a shooting the day before.

Other Resources About Ben Wilson