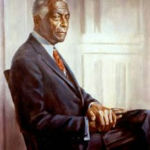 Why Is Benjamin Mays Influential?

According to Wikipedia, Benjamin Elijah Mays was an American Baptist minister and American rights leader who is credited with laying the intellectual foundations of the American civil rights movement. Mays taught and mentored many influential activists, including Martin Luther King Jr, Julian Bond, Maynard Jackson, and Donn Clendenon, among others. His rhetoric and intellectual pursuits focused on Black self-determination. Mays' commitment to social justice through nonviolence and civil resistance were cultivated from his youth through the lessons imbibed from his parents and eldest sister. The peak of his public influence coincided with his nearly three-decade tenure as the sixth president of Morehouse College, a historically black institution of higher learning, in Atlanta, Georgia.

Other Resources About Benjamin Mays

What Schools Are Affiliated With Benjamin Mays?

Benjamin Mays is affiliated with the following schools: