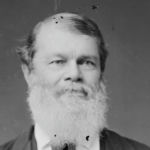 Why Is Beriah Magoffin Influential?

According to Wikipedia, Beriah Magoffin was the 21st Governor of Kentucky, serving during the early part of the Civil War. Personally, Magoffin adhered to a states' rights position, including the right of a state to secede from the Union, and he sympathized with the Confederate cause. Nevertheless, when the Kentucky General Assembly adopted a position of neutrality in the war, Magoffin ardently held to it, refusing calls for aid from both the Union and Confederate governments.

Other Resources About Beriah Magoffin

What Schools Are Affiliated With Beriah Magoffin?

Beriah Magoffin is affiliated with the following schools: