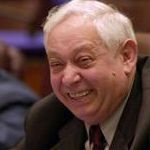 Why Is Bernard Stone Influential?

According to Wikipedia, Bernard "Berny" L. Stone was alderman of the 50th Ward of the City of Chicago, Illinois from 1973 to 2011. The 50th Ward encompasses part of Chicago's far North Side and includes the West Ridge, West Rogers Park and Peterson Park neighborhoods. First elected to the Council in 1973, Stone was the second longest-serving alderman . His tenure spanned the terms of seven Mayors, from Richard J. Daley to Richard M. Daley. Stone was also Vice Mayor of the City of Chicago from 1998 to 2011.

Other Resources About Bernard Stone

What Schools Are Affiliated With Bernard Stone?

Bernard Stone is affiliated with the following schools: