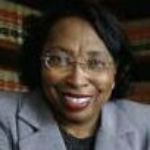 Why Is Bernice B. Donald Influential?

According to Wikipedia, Bernice Bouie Donald is a United States Circuit Judge of the United States Court of Appeals for the Sixth Circuit. Early life and education Born in DeSoto County, Mississippi, Donald received a Bachelor of Arts degree from Memphis State University in 1974 and a Juris Doctor from Memphis State University School of Law in 1979. She was in private practice in Memphis, Tennessee from 1979 to 1980, then became a staff attorney of the Employment Law & Economic Development Unit, Memphis Area Legal Services, Tennessee in 1980. Donald was an assistant public defender, Shelby County Public Defender's Office, Tennessee from 1980 to 1982. In 2018, as a federal appellate circuit judge, she received an LLM from Duke University School of Law.

Other Resources About Bernice B. Donald

What Schools Are Affiliated With Bernice B. Donald?

Bernice B. Donald is affiliated with the following schools: