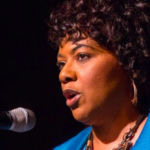 Why Is Bernice King Influential?

According to Wikipedia, Bernice Albertine King is an American lawyer, minister, and the youngest child of civil rights leaders Martin Luther King Jr. and Coretta Scott King. She was five years old when her father was assassinated. In her adolescence, King chose to work towards becoming a minister after having a breakdown from watching a documentary about her father. King was 17 when she was invited to speak at the United Nations. Twenty years after her father was assassinated, she preached her trial sermon, inspired by her parents' activism.

Other Resources About Bernice King

What Schools Are Affiliated With Bernice King?

Bernice King is affiliated with the following schools: