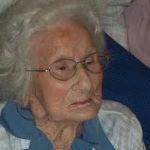 Why Is Besse Cooper Influential?

According to Wikipedia, Besse Berry Cooper was an American supercentenarian who was the world's oldest living person from June 21, 2011, until her death. Early life, education and career Cooper was born Besse Berry Brown in Sullivan County, Tennessee, on August 26, 1896, the third of eight children born to Richard Brown and Angeline Berry . As a child, she did well in school and was an avid reader. She graduated from East Tennessee State Normal School in 1916. It was during this period she became a suffragette, and was a teacher in Tennessee before moving to Georgia in 1917. She taught in Between, Georgia, until 1929.

Other Resources About Besse Cooper

What Schools Are Affiliated With Besse Cooper?

Besse Cooper is affiliated with the following schools: