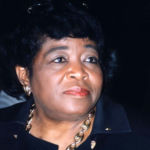 Why Is Betty Shabazz Influential?

According to Wikipedia, Betty Shabazz , also known as Betty X, was an American educator and civil rights advocate. She was married to Malcolm X. Shabazz grew up in Detroit, Michigan, where her foster parents largely sheltered her from racism. She attended the Tuskegee Institute in Alabama, where she had her first encounters with racism. Unhappy with the situation in Alabama, she moved to New York City, where she became a nurse. It was there that she met Malcolm X and, in 1956, joined the Nation of Islam. The couple married in 1958.

Other Resources About Betty Shabazz

What Schools Are Affiliated With Betty Shabazz?

Betty Shabazz is affiliated with the following schools: