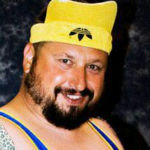 Why Is Biggie Biggs Influential?

According to Wikipedia, Nicholas Podsvirow is an American professional wrestler, better known by his ring name Biggie Biggs. He currently competes on the north-eastern and mid-Atlantic independent wrestling scene. Early life Podsvirow was first introduced to professional wrestling through his grandmother. It was during this time that he was exposed to World Wrestling Federation, National Wrestling Alliance, Jim Crockett Promotions, Championship Wrestling From Florida, American Wrestling Alliance, and World Class Championship Wrestling. Podsvirow credits a 1986 match between Arn Anderson and Don Kernodle as the catalyst behind his pursuit of a career in professional wrestling.

Other Resources About Biggie Biggs

What Schools Are Affiliated With Biggie Biggs?

Biggie Biggs is affiliated with the following schools: