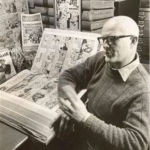 Why Is Bill Blackbeard Influential?

According to Wikipedia, William Elsworth Blackbeard , better known as Bill Blackbeard, was a writer-editor and the founder-director of the San Francisco Academy of Comic Art, a comprehensive collection of comic strips and cartoon art from American newspapers. This major collection, consisting of 2.5 million clippings, tearsheets and comic sections, spanning the years 1894 to 1996, has provided source material for numerous books and articles by Blackbeard and other researchers.

Other Resources About Bill Blackbeard

What Schools Are Affiliated With Bill Blackbeard?

Bill Blackbeard is affiliated with the following schools: