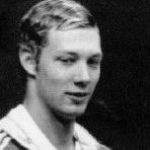 Why Is Bill Forrester Influential?

According to Wikipedia, William Ronald Forrester Jr. is an American former competition swimmer, Olympic medalist, and former world record-holder. He represented the United States as an 18-year-old at the 1976 Summer Olympics in Montreal, Quebec, where he won a bronze medal in the 200-meter butterfly, finishing behind U.S. teammates Mike Bruner and Steve Gregg. Forrester won three gold and two bronze medals at the world championships in 1975 and 1978. Forrester graduated from Auburn University in 1980 and later worked as a swim coach, founding the Georgia Coastal Aquatic Team in 1994.

Other Resources About Bill Forrester

What Schools Are Affiliated With Bill Forrester?

Bill Forrester is affiliated with the following schools: