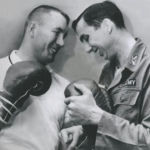 Why Is Bill Nieder Influential?

According to Wikipedia, William Henry "Billy" Nieder is an American athlete who mainly competed in the shot put. Nieder was born in Hempstead, New York, and grew up in Lawrence, Kansas. At the time of 1956 Olympics he was married to Sue and had a daughter Connie of about one year of age. At those Games he won a silver medal, losing to Parry O'Brien. Four year later, he placed fourth at the U.S. Olympic Trials, and was selected to the national team only after Dave Davis withdrew due to an injury. At the Olympics Nieder won a gold medal with a throw of 19.68 m. The mark was the Olympic record and was an improvement of 5 feet from his mark 4 years earlier. Parry O'Brien had also improved over that time but was almost 2 feet behind Nieder.

Other Resources About Bill Nieder

What Schools Are Affiliated With Bill Nieder?

Bill Nieder is affiliated with the following schools: