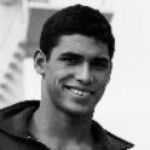 Why Is Bill Woolsey Influential?

According to Wikipedia, William Tripp Woolsey was an American competition swimmer and Olympic champion. He represented the United States at the 1952 Summer Olympics in Helsinki, Finland, where he won a gold medal in the men's 4×200-meter freestyle relay with Wayne Moore, Ford Konno and Jimmy McLane. Four years later at the 1956 Summer Olympics in Melbourne, Australia, he won a silver medal in the 4×200-meter freestyle relay with Dick Hanley, George Breen and Ford Konno.

Other Resources About Bill Woolsey

What Schools Are Affiliated With Bill Woolsey?

Bill Woolsey is affiliated with the following schools: