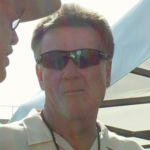 Why Is Bob Seagren Influential?

According to Wikipedia, Robert Seagren is a retired American pole vaulter, the 1968 Olympic champion. A native of Pomona, California, Seagren was one of the world's top pole vaulters in the late 1960s and early 1970s. He won six National AAU and four NCAA titles indoors and outdoors. Indoors he posted eight world bests between 1966 and 1969. He was also the Pan American Games champion in 1967. He set his first world record in Fresno on May 14, 1966, followed by his world records 1967 in San Diego , 1968 in Echo Summit near South Lake Tahoe and 1972 in Eugene . See the Eugene record jump @ 19:20.

Other Resources About Bob Seagren

What Schools Are Affiliated With Bob Seagren?

Bob Seagren is affiliated with the following schools: