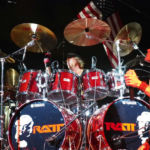 Why Is Bobby Blotzer Influential?

According to Wikipedia, Robert John Blotzer is an American musician best known as the drummer for metal band Ratt. He attended Torrance High School in Torrance, California along with his Ratt bandmate Juan Croucier. Ratt Blotzer began his career playing with Don Dokken along with Juan Croucier. Blotzer and Croucier left Dokken in 1978 to form FireFoxx along with Ron Abrams on guitar. He became Ratt's drummer in 1982. Along with bassist Juan Croucier, he had previously played with noted Italian/Swiss guitarist Vic Vergeat, including a tour of the U.S. behind Vergeat's 1981 solo album Down to the Bone. Ratt had five consecutive platinum albums during the 1980s.

Other Resources About Bobby Blotzer