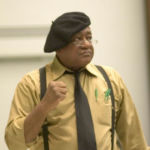 Co-founder of the Black Panther Party

Why Is Bobby Seale Influential?

According to Wikipedia, Robert George Seale is an American political activist and author. Seale is widely known for co-founding the Black Panther Party with fellow activist Huey P. Newton. Founded as the "Black Panther Party for Self-Defense", the Party's main practice was monitoring police activities and challenging police brutality in Black communities, first in Oakland, California, and later in cities throughout the United States.

Other Resources About Bobby Seale

What Schools Are Affiliated With Bobby Seale?

Bobby Seale is affiliated with the following schools:

What Are Bobby Seale's Academic Contributions?

Bobby Seale has made the following academic contributions: