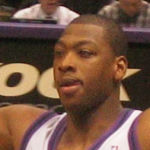 Why Is Bobby Simmons Influential?

According to Wikipedia, Bobby Simmons is an American former professional basketball player. In his career he played for five NBA teams. He won the NBA Most Improved Player Award in 2005. College career After graduating from Chicago's Neal F. Simeon High School, Simmons played three years of college basketball for DePaul University. During his three seasons at DePaul, Simmons averaged 13.6 points per game, 7.5 rebounds per game and 2.2 assists per game.

Other Resources About Bobby Simmons

What Schools Are Affiliated With Bobby Simmons?

Bobby Simmons is affiliated with the following schools: