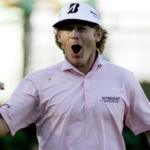 Why Is Brandt Snedeker Influential?

According to Wikipedia, Brandt Newell Snedeker is an American professional golfer who plays on the PGA Tour. He won the 2012 FedEx Cup with a victory in the season-ending Tour Championship at East Lake Golf Club. After this victory, he moved into the top ten of the Official World Golf Ranking for the first time in his career. In February 2013, after winning the AT&T Pebble Beach National Pro-Am, he moved to a career high of number four in the world. On August 16, 2018, he shot the tenth sub-60 round in the history of the PGA Tour, firing an opening round 59 at the Wyndham Championship.

Other Resources About Brandt Snedeker

What Schools Are Affiliated With Brandt Snedeker?

Brandt Snedeker is affiliated with the following schools: