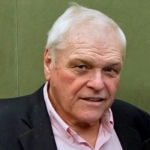 Why Is Brian Dennehy Influential?

According to Wikipedia, Brian Manion Dennehy was an American actor of stage, television, and film. He won two Tony Awards, an Olivier Award, and a Golden Globe, and received six Primetime Emmy Award nominations. Dennehy had roles in over 180 films and in many television and stage productions. His film roles included First Blood , Gorky Park , Silverado , Cocoon , F/X , Presumed Innocent , Romeo + Juliet , Ratatouille , and Knight of Cups . Dennehy won the Golden Globe Award for Best Actor in a Miniseries or Television Film for his role as Willy Loman in the television film Death of a Salesman .

Other Resources About Brian Dennehy

What Schools Are Affiliated With Brian Dennehy?

Brian Dennehy is affiliated with the following schools: