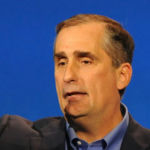 Why Is Brian Krzanich Influential?

According to Wikipedia, Brian Matthew Krzanich is an American engineer and businessman currently serving as the chief executive officer of CDK Global. Krzanich joined Intel as an engineer in 1982 and served as chief operating officer before being promoted to CEO. As CEO, Krzanich was credited for diversifying Intel's product offerings and workforce. However, during Krzanich's term as CEO, Intel went through major restructurings and pulled out of the mobile chip market. Because of Krzanich's decisions, Intel also struggled to produce 10-nanometer chips, compared to chip manufacturers TSMC and Samsung, resulting in numerous delays and a loss of market share in the computer chip business to rivals like AMD.

Other Resources About Brian Krzanich

What Schools Are Affiliated With Brian Krzanich?

Brian Krzanich is affiliated with the following schools: