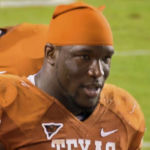 Why Is Brian Orakpo Influential?

According to Wikipedia, Brian Ndubisi Orakpo is a former American football outside linebacker who played 10 seasons in the National Football League . He played college football for the University of Texas, was recognized as a unanimous All-American, and was drafted by the Washington Redskins with the thirteenth overall pick in the 2009 NFL Draft. He also played for Tennessee Titans, and was selected to four Pro Bowls.

Other Resources About Brian Orakpo

What Schools Are Affiliated With Brian Orakpo?

Brian Orakpo is affiliated with the following schools: