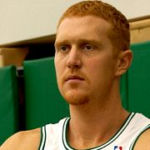 Why Is Brian Scalabrine Influential?

According to Wikipedia, Brian David Scalabrine , nicknamed the "White Mamba", is an American former professional basketball player who is currently a television analyst for the Boston Celtics of the National Basketball Association . He is also the co-host of "The Starting Lineup", which airs weekdays from 7 a.m. to 10 a.m. ET on SiriusXM NBA Radio.

Other Resources About Brian Scalabrine

What Schools Are Affiliated With Brian Scalabrine?

Brian Scalabrine is affiliated with the following schools: