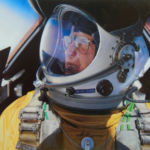 Why Is Brian Shul Influential?

According to Wikipedia, Brian Shul is a Vietnam War-era attack pilot and a retired major in the United States Air Force . He flew 212 combat missions and was shot down near the end of the war. He was so badly burned that he was given next to no chance to live. Surviving, he returned to full flight status, flying the SR-71 Blackbird. Major Shul completed a 20-year career in the Air Force. He has written four books on aviation and runs a photo studio in Marysville, California.

Other Resources About Brian Shul

What Schools Are Affiliated With Brian Shul?

Brian Shul is affiliated with the following schools: