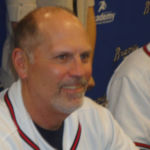 Why Is Brian Snitker Influential?

According to Wikipedia, Brian Gerald Snitker is an American professional baseball coach and former player who is the manager of the Atlanta Braves of Major League Baseball . Snitker has been in the Braves organization in different roles since playing in their minor league organization from 1977 to 1980. He became their manager in 2016. In 2021, Snitker led his team to a World Series championship.

Other Resources About Brian Snitker

What Schools Are Affiliated With Brian Snitker?

Brian Snitker is affiliated with the following schools: