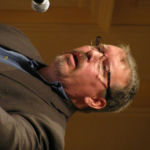 Why Is Brian Turner Influential?

According to Wikipedia, Brian Turner is an American poet, essayist, and professor. He won the 2005 Beatrice Hawley Award for his debut collection, Here, Bullet the first of many awards and honors received for this collection of poems about his experience as a soldier in the Iraq War. His honors since include a Lannan Literary Fellowship and NEA Literature Fellowship in Poetry, and the Amy Lowell Poetry Travelling Scholarship. His second collection, shortlisted for the 2010 T.S. Eliot Prize is Phantom Noise .

Other Resources About Brian Turner

What Schools Are Affiliated With Brian Turner ?

Brian Turner is affiliated with the following schools: