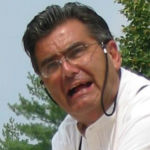 Why Is Brother Jed Influential?

According to Wikipedia, George Edward "Jed" Smock, Jr. , better known as Brother Jed, is an American evangelist whose open-air preaching ministry is concentrated on college campuses. He has preached at major universities in all 50 US states, and in some other countries. As an itinerant preacher, he usually only spends a few days on each campus, visiting the northern campuses in the fall and spring and the southern campuses in the winter months. In 2004, he relocated to Columbia, Missouri, where he often preached at the University of Missouri and other colleges throughout the Midwest. In the summer of 2013, he relocated his ministry and residence to his hometown of Terre Haute, Indiana.

Other Resources About Brother Jed

What Schools Are Affiliated With Brother Jed?

Brother Jed is affiliated with the following schools: