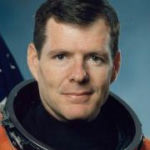 Why Is Bryan D. O'Connor Influential?

According to Wikipedia, Bryan Daniel O'Connor is a retired United States Marine Corps Colonel and former NASA astronaut. He was inducted into the United States Astronaut Hall of Fame in 2008. Personal Born September 6, 1946, in Orange, California, but considers Twentynine Palms, California to be his hometown. Bryan and his wife Susan have two sons, Thomas and Kevin. His son Thomas is a veteran of Operation Iraqi Freedom and is a captain in the Army National Guard. The O'Connor family enjoys hiking and music.

Other Resources About Bryan D. O'Connor

What Schools Are Affiliated With Bryan D. O'Connor?

Bryan D. O'Connor is affiliated with the following schools: