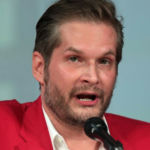 Why Is Bryan Fuller Influential?

According to Wikipedia, Bryan Fuller is an American television writer and producer who has created a number of television series, including Dead Like Me, Wonderfalls, Pushing Daisies, Hannibal, and American Gods. Fuller worked as writer and executive producer on the Star Trek television series Voyager and Deep Space Nine; he is also the co-creator of Star Trek: Discovery.

Other Resources About Bryan Fuller

What Schools Are Affiliated With Bryan Fuller?

Bryan Fuller is affiliated with the following schools: