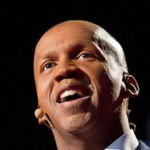 Why Is Bryan Stevenson Influential?

According to Wikipedia, Bryan Stevenson is an American lawyer, social justice activist, law professor at New York University School of Law and the founder and executive director of the Equal Justice Initiative. Based in Montgomery, Alabama, he has challenged bias against the poor and minorities in the criminal justice system, especially children. He has helped achieve United States Supreme Court decisions that prohibit sentencing children under 18 to death or to life imprisonment without parole. He has assisted in cases that have saved dozens of prisoners from the death penalty, advocated for the poor, as well as developed community-based reform litigation aimed at improving the administration of criminal justice.

Other Resources About Bryan Stevenson

What Schools Are Affiliated With Bryan Stevenson?

Bryan Stevenson is affiliated with the following schools:

What Are Bryan Stevenson's Academic Contributions?

Bryan Stevenson has made the following academic contributions: