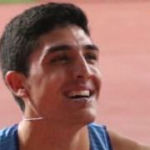 Why Is Bryce Hoppel Influential?

According to Wikipedia, Bryce Hoppel is an American middle-distance runner, who is a member of the 2020 U.S. Olympic track team for the 800 meters. He holds the American indoor record in the 1000 meters. Hoppel attended the University of Kansas. Hoppel had a breakout junior year at Kansas, where he won 21 consecutive races between the indoor and outdoor season, including two NCAA Individual Championships in the 800 meters. Hoppel's 21 race streak came to an end when Hoppel finished 3rd at the 2019 USA Track & Field Outdoor Championships, qualifying for the 2019 World Championships in Athletics.

Other Resources About Bryce Hoppel

What Schools Are Affiliated With Bryce Hoppel?

Bryce Hoppel is affiliated with the following schools: