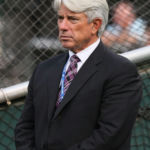 Why Is Buck Martinez Influential?

According to Wikipedia, John Albert "Buck" Martinez is an American former professional baseball catcher and manager, and is currently the television play-by-play announcer for the Toronto Blue Jays. He played 17 seasons in Major League Baseball with the Kansas City Royals, the Milwaukee Brewers, and the Toronto Blue Jays. Since the end of his playing career, he has been a broadcaster, working on the Blue Jays and Baltimore Orioles radio and television broadcasts, and nationally for TBS and MLB Network. Martinez managed the Toronto Blue Jays from 2001 to May 2002 and Team USA at the inaugural World Baseball Classic in 2006.

Other Resources About Buck Martinez

What Schools Are Affiliated With Buck Martinez?

Buck Martinez is affiliated with the following schools: