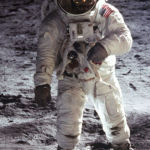 Why Is Buzz Aldrin Influential?

According to Wikipedia, Buzz Aldrin is an American former astronaut, engineer and fighter pilot. He made three spacewalks as pilot of the 1966 Gemini 12 mission. As the Lunar Module Eagle pilot on the 1969 Apollo 11 mission, he and mission commander Neil Armstrong were the first two people to land on the Moon.

Other Resources About Buzz Aldrin

What Schools Are Affiliated With Buzz Aldrin?

Buzz Aldrin is affiliated with the following schools:

What Are Buzz Aldrin's Academic Contributions?

Buzz Aldrin has made the following academic contributions: